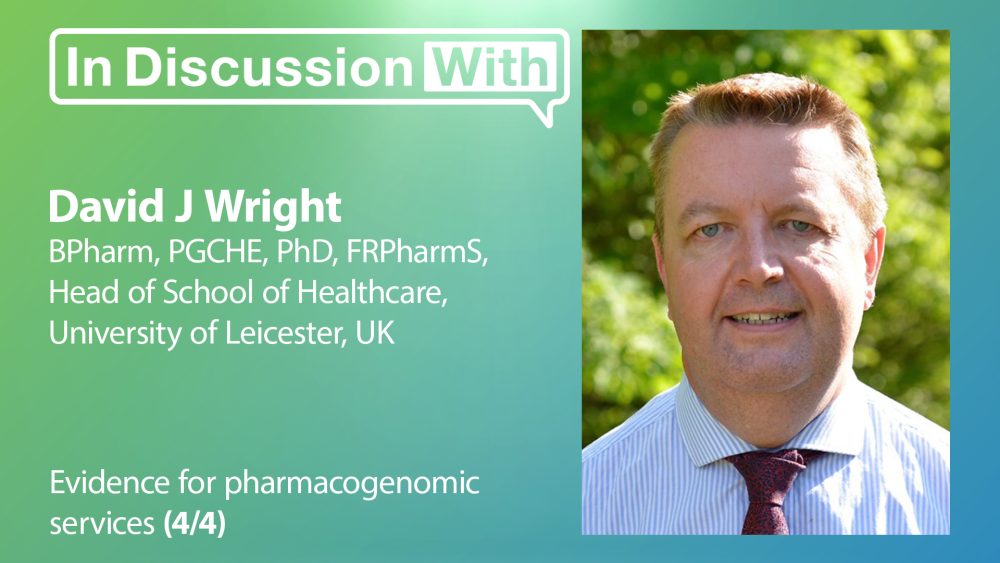 A growing number of studies are now providing evidence for the benefits of pharmacogenomics testing (PGx) services. What is now needed is a study to demonstrate the effectiveness of an integrated service in the real world, argues David Wright, Professor of Health Services Research at the University of Leicester.

So far studies involving antidepressants, warfarin and clopidogrel have demonstrated the effectiveness and cost-effectiveness of testing services. “It’s kind of common sense if you know that one in five times you get the right drug for a patient more quickly – more quickly than you would have done – and therefore they go to back to the GP less frequently – then there’s some savings to be had”, says Professor Wright.

Recently the PREPARE (PREemptive Pharmacogenomic Testing for Preventing Adverse Drug REactions) study was completed. This involved centres in several European countries. So far, “what’s been presented are what’s very encouraging and positive results from a well-conducted trial”, he says. In this study centres tackled single drugs “they didn’t do multi-testing which is what we tend to do so that you get the additional benefits of all the other drugs being checked at the same time”, he says.  There are now about 120 drugs for which PGx testing can be done so it is possible that people receiving multiple drug therapy will have several potential actionable drug-genome interactions (DGIs).

At present there are two critical gaps. The first is the need for a service that tackles polypharmacy rather than single drugs. The second is working out how to incorporate PGx testing into services and make it part of the system. “I want to actually put it into the real world – and that’s what the MRC guidance is all about – and show the benefit in the real world with a proper system set up”, says Professor Wright.

A further trial is now required “because the world is complex and because putting a test into the system is not that easy”, he says. By definition, in a trial the people involved have all “signed up” and are committed to the service but this does not reflect the way that services operate in the real world. “So, what they’ve done is shown the benefits if it’s done beautifully and perfectly – my job as a health services researcher is then to translate that into the real world and into real practice and still show the benefits are maintained as a result”, he explains.

Regarding funding for a future PGX testing services, Professor Wright says that he would want to see it as part of the national [community pharmacy] contract. “I think it’s probably one of the most sensible things we could add into the national contract because it really works across the different professions and really integrates us into the system. But for that to happen we need that evidence so that’s why I want the trial, that’s why I want to have some real guidance on how to train the pharmacists to do this, how to set the service up appropriately, how to build those relationships and then run it out. So, you know the NHS says anything that has a cost per QALY of less than twenty thousand pounds it can afford …..  that’s the measure we have to use – so we need to do this trial on a set group of patients, demonstrate the cost per QALY and then we go back via Community Pharmacy England …… to say, ‘Here’s your evidence’.”

The next steps will involve putting in a grant application to do the feasibility testing. “We’ve done the listening; we’ve looked at the literature. We’re now ready to set up and run a small service and test it and then run the big trial and get the evidence – and I don’t think it should take that long – purely because we’ve done all the groundwork”, he says.

Professor Wright’s message to pharmacists is: “This is our role; this is how we put ourselves on the map and this is how we show patients that we are the scientists on the high street – and we have that academic expertise to help [them to] get the most out of their medicines”.

He also holds the position of Professor of Clinical Pharmacy at the University of Bergen, Norway