The patient experience of ivermectin 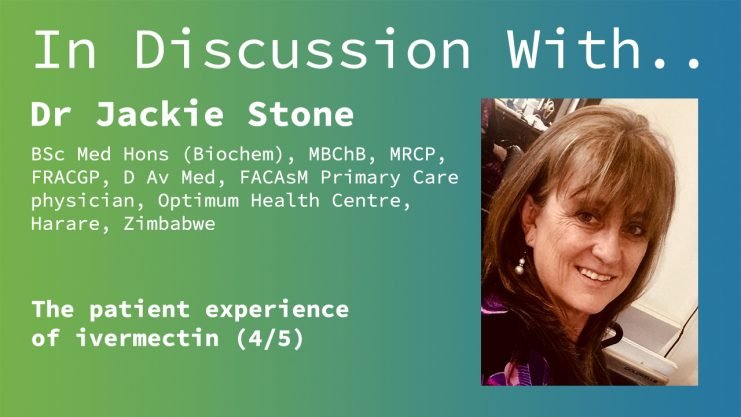 Dr Jackie Stone describes how her own experiences of taking ivermectin for severe covid and those of others have provided further insights into the value of this drug.

During the July –August wave of coronavirus infection a number of people who were fairly senior in Government, public services, the army, the air force and industry became very sick. Dr Stone explains, “They heard that this treatment was working and they sought us out – and they got better. So, we have high-level people who got better and there’s nothing quite like experiencing – and I have – the recovery and the rapidity of the recovery on ivermectin and our adjuvant treatments. The anxiety when you are hypoxic is difficult describe – there’s a real sense of impending doom, you know you are going to die. Then you take medication and it resolves. Nothing convinces anybody quite as spectacularly as a person who has gone from 88% to 95% [oxygen saturation] – he doesn’t really care what the double-blind randomised controlled trial says – he’s experienced it for himself”.

Dr Stone herself has had covid-19 on two occasions. Both episodes were the result of inadequate prophylaxis, she says. She recovered from the first, mild episode very quickly. The second time she was heavily exposed as a result of spending four hours close to a very sick patient who ultimately did not survive. She went home, used a nebuliser and took 20mg ivermectin “then we went into four or five days from hell – we were busy 24/7, the phone was going continually and we were visiting patients in their homes”, she says. She took no prophylaxis over that period because “in her head [she] only needed to take ivermectin once a week”, she remembers. “I really wasn’t feeling great and on 3rd January I became very unwell – it was like getting full blown malaria and secondary drowning simultaneously”, she says.  One of the other doctors treated her and she took 100mg of ivermectin and clearly remembers the effect it had.

“It was the most incredible feeling it was like my solar plexus warmed up. I was very peripherally shut down – they were struggling to get a line in – and I’ve got huge veins – people used to practice cannulating on me at med school. The feeling spread out from my midriff all the way out to my peripheries over a couple of hours and my oximeter – I was going really fast, pulse 140 – but the oximeter wave form had gone from very flat and slightly irregular – I went in to atrial fibrillation (AF) and I was going into paroxysmal AF and I had quite a lot of chest pain as well – and suddenly I started to hear the beep, beep, beep and you saw the wave form getting bigger and bigger. We have a nurse who is probably the best observational nurse I’ve ever known  – he’s taught me so much because he’s by the bedside for 12 hours. Spencer said to me “Doc, when that happens they’re ready to go home. You can send them home on oxygen it’s fine now they’re reperfusing”.  So – if covid is a thrombotic event, ivermectin is a reperfusion drug.”

In addition to these effects, “The brain fog lifts, the feeling of impending doom lifts, the body pain, the systemic symptoms all start to go away, the headache goes away” she adds.  The roof looked as if it was a wave pool but she told herself it was a visual side effect of ivermectin and thought, “Excellent! I’ve had enough [ivermectin]!”

No more fear of covid

On reflection, Dr Stone says, “I’m not scared of this disease at all any more, I really am not. Every single patient that we have with sats of over 70% survives. ….. My idea of the perfect job is that I see a patient for four hours and I fix them and we don’t see them again. They come in, they’re very, very sick. Six hours later they’re dramatically better and you send them home on oxygen only – that’s fabulous! Patients and families are very grateful and it’s very satisfying seeing the rapid improvement.”

No more covid in Zimbabwe

Speaking of people with covid-19 Dr Stone says, “They used to [seek me out] – but there isn’t any more covid in Zimbabwe!

At the peak of the January wave she could have as many as 20 WhatsApp calls per hour and had pre-programmed automated replies to direct people to nurses for assessment and doctors for prescriptions. “We probably managed hundreds of patients a day within our team and by outsourcing it to teams elsewhere”, she says. However, since mid-February the call rate has fallen sharply. “People tend to phone me or one of the GPs that follows our protocol. I think I had two or three phone calls in the whole of last week and this week I’ve had one and they’ve all been early disease. Everybody knows because everything I have sent out emphasises, treat early, treat early, treat early… Do not go home and wait to get sick. Contact us by phone and we will tell you what to or we will send nurses to you”.