Managing covid-19 with ivermectin in Zimbabwe 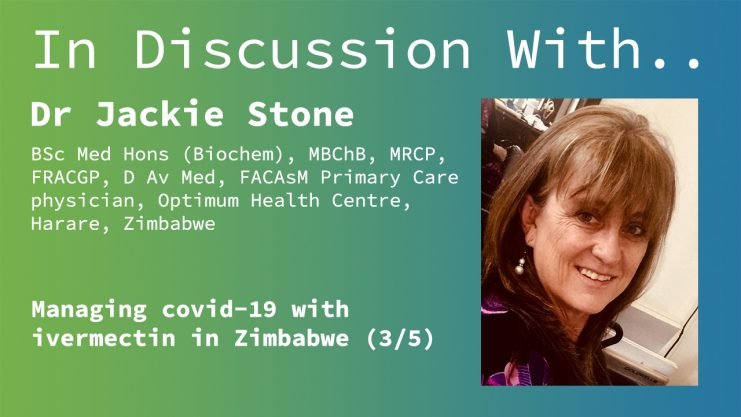 Dr Jackie Stone describes how large doses of ivermectin are safe and effective for the treatment of covid-19 and side effects are temporary and tolerable.

“The first thing you give is the ivermectin”, says Dr Stone.  Initially, for mild disease, her team used doses of 0.2 – 0.3 mg/kg on days 0, 4 and 8 but soon found that 0.2 mg/kg for five days was more effective. Later the dose was further increased to then 0.3mg /kg for five days, based on information from colleagues in South Africa.

“Now, because we’ve been using it for a long time we’ve got very confident with its safety”, says Dr Stone. Falling sick with covid-19 themselves has given Dr Stone and her team deeper insights into the way that ivermectin can be used for the best effects.  “We’ve realised sometimes you’ve got to give 0.2/kg, then hit it again with 0.2/kg, then hit it again with 0.2/kg and if you think that you are going to lose the patient, we know that below 0.6 /kg is definitely safe so we give 0.6/kg”, she says. For example, for a female patient who presented with oxygen saturation of 43% recommended a dose, to be repeated if necessary.  “The worst thing that’s going to happen is that they’re going to get a visual disturbance. You warn them that they may get temporary blindness but that it will not last”, she adds.

“Our introduction to bigger doses actually came quite early”, explains Dr Stone. “One of the lessons I discovered was that if you’re going to give a hypoxic patient medication, make sure you tell their partner or the person who is giving the medication what to do, because they appear to all intents and purposes to be communicating with you but they are effectively not quite there”.

Two patients illustrated this situation clearly: The first was a female patient who presented with oxygen saturation of 89% and was systemically very unwell. She was given five 12 mg tablets of ivermectin to take once a day herself and an additional 12mg tablet as a prophylactic dose for her husband. Dr Stone recalls, “In the morning I phoned her and she’s superbly well. She said, “Oh, I’m so grateful to you, I’ve been so sick, this is fabulous….” “. Further enquiries revealed that she had taken all six doses (a single dose of 72mg) herself on the previous evening. “She only weighs about 60kg –  and she had no side effects, which is quite remarkable”, notes Dr Stone.

The other patient was a man who had been very sick for five days despite taking 12mg ivermectin a day for five days. He presented with oxygen saturation in the low 80s. “At this stage I was starting to see a pattern ….. if we’re underdosing them, there’s a problem because they’re not getting better …… and if your viral load is very high and you don’t have enough coating the virus is going to escape and replicate so our protocol now is to escalate the dose if there’s no response in the first 24 hours”, says Dr Stone.

She recalls, “He came in and said you just need to do something”.  She explained that she would switch his dose to 20mg/day for a further five days. “I laid everything out, turned round and he’d taken the entire 100mg as a single dose. So, he was in front of me so I was thinking, do I pump his stomach?  What do I do? And I looked at the data. You know they’ve used up to 2mg per kg – 20 times the dose – in the malaria studies and in the Kenyan studies”, she said.  “Doctors in Africa are not scared of this drug – it is a lot safer than paracetamol – so they are relaxed about it”, she adds. In the evening the patient telephoned and said, “I’m feeling absolutely great – I’m off to go and hit some balls”. He then went to the driving range to play golf. He had no blurred vision. “Interestingly, the two patients who took big doses that were thin did not have blurred vision”, notes Dr Stone. Other patients have reported visual disturbances. One 120kg patient he took 100mg on his own initiative and then telephoned Dr Stone to say, “I don’t know what’s going on here – I’m dizzy and I’ve got blurred vision”.  She responded, “Don’t worry, it will resolve within 48 hours. You’re not going to die from it but you were very sick with covid”. She comments that he made a significant recovery quite quickly.