How ivermectin works – and how this plays out in practice 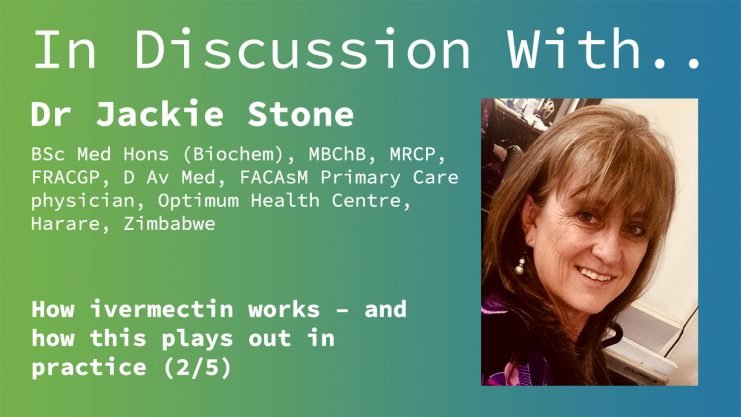 Understanding how the drug works helps to point the way to effective treatment. Ivermectin works at several points in viral replication. Ivermectin coats the virus, binding to the spike protein, which prevents it from entering cells both via the ACE2 receptor and the CD147 receptor. Second, it inhibits RNA polymerase. It is also a zinc ionophore – and zinc inhibits RNA polymerase in a dose-dependent manner. Using the two drugs together should ensure robust inhibition of RNA polymerase. “In a docking study it was also found to bind very tightly to RNA helicase. Now, when RNA polymerase has finished its work you’ve got a double-stranded piece of RNA, you need to separate that and RNA helicase does that. Ivermectin in vitro and in computer studies has been shown to bind tightly to the helicase and we know that it has activity against all RNA viruses like yellow fever and West Nile virus [amongst others}”, explains Dr Stone.

“Taking the early phase, if we can coat the virus, stop RNA polymerase, stop RNA helicase we’ve done quite a good job at the at point” , says Dr Stone. The addition of doxycycline, which is also a zinc ionophore (and therefore it will inhibit RNA polymerase) and also binds to double-stranded RNA ensure that there are two agents shutting down viral replication at three points.

“What I do in the early stage – I want to hit them hard because I want to shut this virus down – we cannot afford for our patients to become hypoxic. They drive around the city looking for oxygen and dying.  We need to smack it before they hit the inflammatory stage, before they hit the thrombotic stage and before their oxygen saturations drop – so that’s part of the reason that we are so aggressive with treatment”, she says.

“If I’ve got a patient in a later stage ………………. the virus binds to the CD147 receptors and cross links red cells, white cells and endothelium and you get ‘sludging’.  Effective treatment with ivermectin and doxycycline reverses these effects. “It’s going to be like Lego that comes undone and suddenly the patient will re-perfuse”, explains Dr Stone.

“The other interesting thing is that after we give ivermectin the D-dimer goes through the roof” she says. D-dimer, she emphasises, is a fibrin degradation product and therefore a marker of clot resolution. “….so it means that the clots and the fibrin is breaking down”, she adds.

A real life example of this phenomenon was a patient called Joe. His D-dimer was 2,500 on day 1. He went home and the next day’s result was reported as, ‘Greater than 10,000, unrecordable’. Fearing that the patient might have died Dr Stone immediately telephoned the nurse who said, “He is hugely better. He’s chatting, he’s eating, he’s wanting go for a walk”.

Thinking about it, “…when the D-dimer rockets it’s a marker of clot resolution; it’s a sign the patient is actually getting better”, concludes Dr Stone.