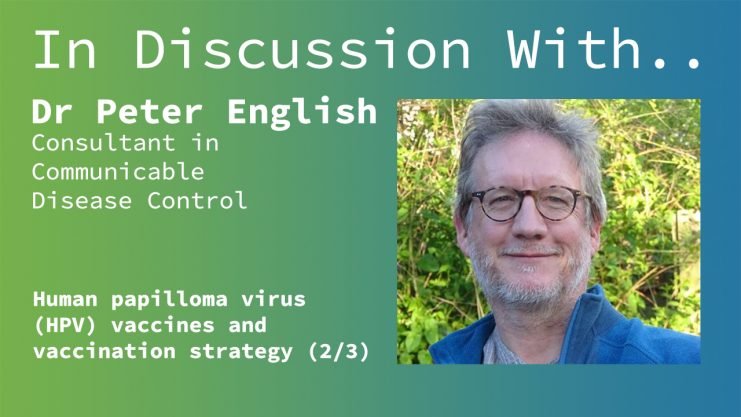 The current UK strategy involves vaccination of both boys and girls, although originally vaccination was confined to girls only.  “The hard economics favour vaccinating girls – you get a much bigger ‘bang for your buck’ – it’s girls who get cervical cancer and initially, at least, they focused very strongly on cervical cancer. …. The additional benefit of vaccinating boys was thought to be relatively small, particularly in terms of cervical cancer. Of course, it has a much bigger benefit for genital warts and when you look at the penile cancers, anal cancers, head and neck cancers the benefits add up and in the end I think they decided it was cost-effective to vaccinate boys”, explains Dr English. In addition, there were equity considerations – it was perceived as being unfair to protect girls but not to protect boys. The combination of fairness and economic arguments favoured vaccination of boys as well as girls.

There are several different HPV vaccines. “The one we used initially when we first introduced the programme was a vaccine called Cervarix® which surprised many of us because it’s only got the two strains (HPV16 and HPV18) that cause the most cervical cancers and doesn’t include the virus types that cause genital warts so it would not have been beneficial in preventing genital warts”, says Dr English. When the contract came up for renewal three years later Gardasil® vaccine was selected. This protects against four strains of HPV – the two that would prevent the two most oncogenic strains and the two causing most of the genital warts (HPV6 and HPV11). A newer vaccine, Gardasil 9®, provides protection against the two genital warts strains, the two original oncogenic strains and another five oncogenic strains – those next most likely to cause cervical cancer.

“The original vaccine probably prevented about 70% of the cancers and the nine-valent one – about 90% of cervical cancers. So, vaccines should prevent about 90% of cervical cancers. There are another 10% that it won’t prevent, which is why we need to continue screening and at the moment…. that’s done by HPV testing to see if you have HPV in your genital tract”, says Dr English

Primary HPV screening was rolled out to the whole of the UK in December 2019. This is a simpler procedure than taking cervical smears. “The screening is much easier – you don’t need to be up on a bench with the stirrups and a speculum to take a vaginal swab which would be a much simpler, less invasive, less unpleasant procedure and if we can get to the stage where we can do urine samples instead that will be even easier. ……Only 90% [of cervical cancers] can be prevented by vaccination but the remaining 9% you could in theory prevent with screening, as long as people come in for the screening or send off their swabs”, explains Dr English. Home HPV screening was also announced in February 2021.  “Swabs done at home are simple and easy to do and should be very effective.  We should be able to pick up quite a chunk of the remaining 9%. There’ll still be the uncatchable remaining 1% which may not be caused by HPV at all”, he adds.