Asthma and why it causes deaths in the UK 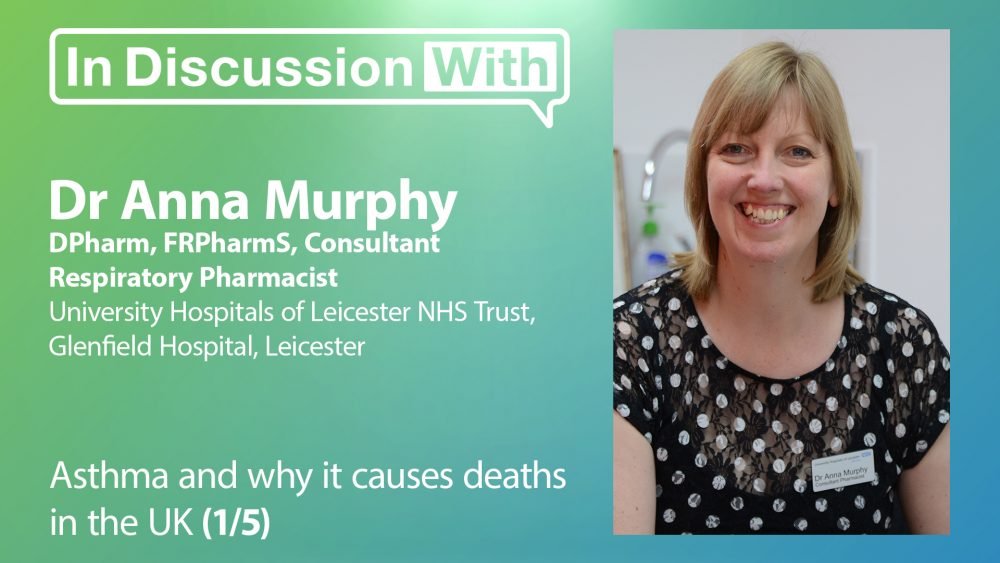 Three deaths each day in the UK are due to asthma despite considerable advances in the understanding of the disease and the treatments available. IMI spoke to Dr Anna Murphy, Consultant Respiratory Pharmacist, University Hospitals of Leicester NHS Trust, to find out more.

Dr Murphy holds three outpatient clinics per week – two for asthma and one for interstitial lung disease. She also has a role in integrated care working across the integrated care system and participating in a virtual multidisciplinary team (MDT) for chronic obstructive airways disease (COPD). In addition, she is involved in training for GPs, practice nurses and community pharmacists and also teaches at universities. “I’m very clinical – patients are extremely important to my role and what I do”, she says.

Asthma is a chronic inflammatory disease that commonly starts in childhood. Some children grow out of it as they get older, some will continue and some people find that the asthma comes back later in life.  For some people, asthma actually presents for the first time much later in life.  “Fundamentally, in most cases of asthma it’s really where your immune system is being overactive. It’s reacting to environmental triggers that the patient breathes in, so what you get is an influx of inflammatory cells, largely probably eosinophils which cause inflammation in the lungs – and that’s key for us to understand as pharmacists and key for our patients to understand as that is fundamental to how we manage asthma”, Dr Murphy explains.

About 1300 people die of asthma each year in England and Wales, according to the Office for National Statistics. “Probably 90 percent of those people have factors that could be preventable, so if we actually got care better – prescribing the right medicines for them, give them action plans, make sure they know what to do if they have asthma symptoms – then we can probably prevent a lot of those deaths”, says Dr Murphy.  Providing the information is one thing, but helping patients understand and “take on board” the advice is one of the challenges of effective asthma management. “For instance, it’s vital that people with asthma can inhale appropriately their inhaled corticosteroids. We try and encourage people not to over-rely on their salbutamol – their shorter-acting beta-2 agonist – and getting those messages across is really, really important”, she adds.

Dr Murphy says: “The national review of asthma deaths in 2014 actually showed that nearly 40 percent of people who died used more than 12 salbutamol inhalers in a year and about 80 percent of people who had died were using less than 12 of their inhaled corticosteroids a year, which, of course, is what you would expect a patient to be doing. So, these are the fundamentals that we need to look at to try and prevent people from dying of asthma”.