Testing and using drug treatment during a pandemic 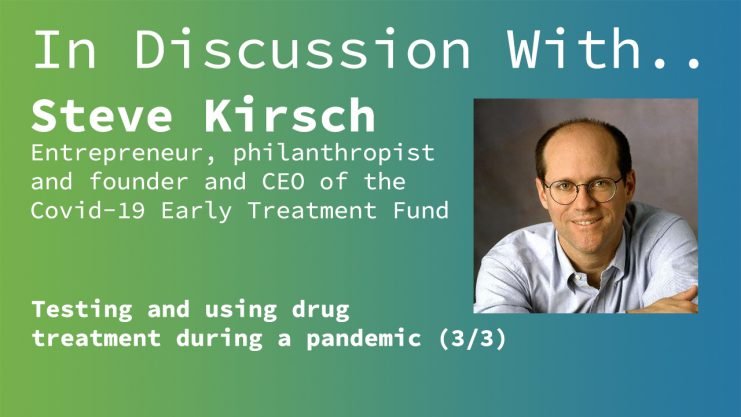 Steve Kirsch, CEO of the Covid-19 Early Treatment Fund (CETF) explains how a study in Nepal will advance our understanding of effective early treatment for covid-19 and how this plays into the bigger picture.

The Covid-19 Early Treatment Fund is supporting a trial in Nepal in which a variety of drug combinations will be tested. This will start with an open-label period during which patients will be able to choose the combination that they would prefer. Once the most promising, apparently effective combinations have been identified, they will be tested in a formal trial. “Once we find the drug combinations that work – because  everybody is unblinded –  we can act in real time and move things around very quickly. Then we can do the study that proves it works”, says Mr Kirsch.  This is expected to yield results more quickly than the normal process in which a trial could take a year to test a treatment and, if unsuccessful, time has been lost. Essentially, the scheme in Nepal will be a bigger version of the Seftel study with multiple choices. Preliminary results are expected within two months, depending on the speed of set-up and recruitment

Turning to the broader issue of how new treatments should be handled during a pandemic, Mr Kirsch says, “There’s a principle called the precautionary principle where you basically act on all the available evidence quickly in a pandemic to make the best possible decision that will minimise the [number of] lives lost. So basically the precautionary principle states that we should sometimes act without definitive evidence ‘just in case’…… and so, if you have no evidence of harm and potential evidence of good then, even though it’s not definitive, you should use it.”

Under normal circumstances there is a tendency to err on the side of caution and avoid possible mistakes. However, “In a pandemic the precautionary principle is the reverse because it is how you preserve life. So it’s important that people understand that in a pandemic the precautionary principle says, “What is the precaution that we take to preserve life?” – and ivermectin is the perfect example of that. We don’t have any proof at all that ivermectin makes things worse but we have 22 studies, including at least seven double-blind randomised controlled trials that say it works. So, the most obvious thing to do is to say that the evidence is probably right because we cannot prove it is wrong. Giving the ivermectin may in fact save lives but it won’t do any harm – but we think that it works and so that’s OK because if we’re wrong there’s no harm.  We have 22 studies that say ivermectin works”, he says.

Mr Kirsch believes that the World Health Organisation (WHO) and the National Institutes of Health (NIH) should add ivermectin and fluvoxamine to their guidelines. “That would be a major step forward and if we just did those two drugs, we could have an order of magnitude or close to two orders of magnitude difference”, he says.  “If I could tell you one thing it’s, “Get treated early”. If I could tell you two things it’s like fluvoxamine and ivermectin are game-changing for this virus”, he adds. Other drugs may also be important including proxalutamide, inhaled budesonide, zinc and hydroxychloroquine.  “We don’t quite know what the right combinations of these things are because combinations have not been tried and tested and that’s what we are trying to do in Nepal”, he concludes.