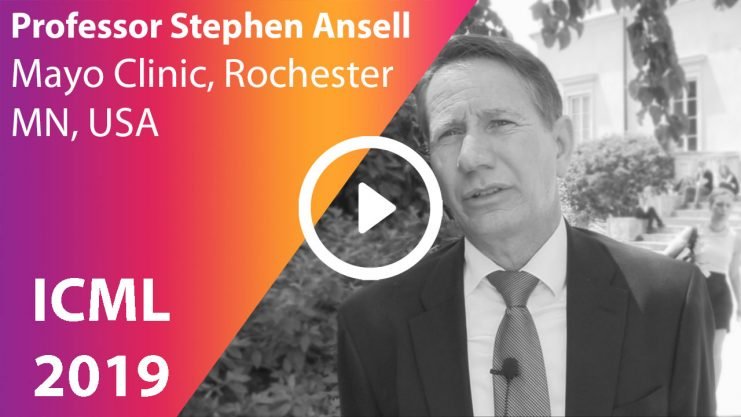 One element of the follow-up report was to re-analyse the results using Deauville criteria for response instead of the International Working Group (IWG) criteria that were used when the trial was started. There was some discordance between the independent review committee assessments and investigator assessments of response when the IWG criteria were used – but greater concordance when the Deauville criteria were applied, noted Professor Ansell. Further analysis of PET status at the end of treatment as a predictor of progression-free survival (PFS) is now warranted, he added.

The results showed a complete metabolic response rate of 75% at the end of therapy and a PFS rate of 83% at 21 months. Treatment-related adverse events (TRAEs) were mainly haematological but overall the treatment was well-tolerated with no new safety signals during the extended follow up.  Professor Ansell emphasised that this was mainly a safety study so wider conclusions should be drawn with care.

Consolidation radiotherapy could safely be omitted in advanced-stage HL patients with lymph node masses (LNMs) if they achieve a negative PET-2 and end-of-treatment (EoT) PET, irrespective of the size of the mass and this could translate into a significant reduction in late-onset treatment-related complications,  Professor Andrea Gallamini (Lacassagne Cancer Center, Nice, France) told the audience.

Consolidation radiotherapy (cRT) was originally recommended for advanced stage HL patients treated with ABVD. However, PET/CT is more accurate than CT in assessing treatment response and an EoT PET-driven strategy has been proposed that would limit cRT to those with a positive EoT PET. In this study of 782 patients with advanced-stage HL, two cycles of ABVD were administered; patients with a positive PET (PET-2) then received eBEACOPP with or without RT while PET-2 negative patients received four cycles of ABVD; those with large nodal masses were then randomised to receive cRT or no further treatment (NFT).  The six-year follow up results showed that the majority of patients had a post-ABVD residual mass and the PFS rate for cRT vs NFT was 92% (95% CI 88-97%) vs 90% (95% CI 85-95%) (p=0.48). As the baseline LNMs were in the mediastinum in more than 80% of patients, avoidance of cRT could reduce mortality from secondary tumours and coronary arterial disease, commented Professor Gallamini.

An economic analysis of treatment strategies for newly-diagnosed advanced stage HL concluded that the most cost-effective strategy was to start treatment with eBEACOPP and then de-escalate to ABVD if the PET-2 was negative, that is, the approach that was used in the AHL2011 trial.  Dr Anca Prica (University of Toronto, Canada) added that for patients who valued fertility over relapse risk, it may be preferable to start with a non-BEACOPP approach.

Commenting on the findings Dr Andrew Macmillan (Nottingham University Hospitals, UK) said that the OEPA-COPDAC regimen that was not included in the analysis also gives good results (in children) and might be worth building into a future analysis.

A 26-year-old man presented with night sweats, unexplained fever and a 20 lb weight loss. A cervical node biopsy show classical nodular sclerosing HL with an International Prognostic Index (IPI) score of 3. He received six cycles of ABVD. A PET-3 had a Deauville score of 3 but at the end of treatment this had risen to 5.  The patient was referred to the MD Anderson Cancer Center and received salvage therapy with ICE and then underwent an autologous stem cell transplantation (ASCT). ESHAP would have been the most likely salvage regimen in Spain, said Dr Sureda. Two months later he had a recurrence of biopsy-proven HL and was treated with a CD30 CAR T-cell therapy. Dr Sureda commented that CAR T-cell therapy is not available in Spain and the PD-1 inhibitor nivolumab would have been given instead.  Nine months later the patient had a recurrence of biopsy-proven HL. Both clinicians argued for an allogeneic stem cell transplant (allo-SCT) at this stage but the patient opted for nivolumab and has now been in complete remission for five months. If an allo-SCT is needed in future then the nivolumab should be discontinued two months before the procedure, said Dr Sureda