Update – Safe handling of insulin OR Avoiding errors with insulin

by Christine Clark – Insulin ranks among the top 10 ‘high-alert’ or high-risk medicines worldwide. (ref  NPSA/2011/PSA003) It is also been an important cause of hospital admissions, mainly as a consequence of severe hypoglycaemia. (ref  NPSA/2011/PSA003)  As the prevalence of diabetes in Europe and the number of insulin products available both continue to increase it is important for all those involved in the prescribing and administration of insulin to be aware of the risks and the necessary safety measures.

Incident reports and what they show

During the six year period from 2003-2009 the UK National Patient Safety Agency (NPSA) received 16,600 reports of incidents involving insulin. About 7% of incidents were associated with significant harm – 18 incidents with fatal and severe outcomes and 1,042 incidents of moderate harm. (ref Cousins 2011 p28a). Similar findings were reported by the US Pharmacopoeia MEDMARX programme as far back as 2003. According to its report 6.6% of insulin-related incidents caused harm to the patient. (Ref Cousins 2011 p29a)  Although the majority of incidents resulted in no harm to patients, experts believe that all incidents can help to identify weaknesses in the system or ‘latent errors’ and therefore merit recording and analysis.

The first step in preventing errors with insulin is understanding how and why they occur.  The UK NPSA  report showed that incidents occurred at all stages of the medication use process – 17% at the prescribing stage, 10% during dispensing and 61% during administration. (Ref Cousins 2011 p28b)  Further analysis showed that three main types of error accounted for the majority of incidents – wrong dose errors, delayed or omitted insulin and wrong insulin product errors. (Cousins 2011 p28c) (See table 1)

The main causes of wrong dose incidents were:

• abbreviation of ‘units’. With poor handwriting the abbreviations ‘U’ ‘IU’ may be read as ‘0’ or 10’ and lead to unintended 10 times and 100 times dose errors

• incorrect monitoring of blood glucose and dose adjustment of insulin

• errors in calculation of insulin doses for intravenous infusion

Tenfold errors in insulin dosage have been reported when abbreviations such as ‘U’ or ‘IU’ have been misinterpreted as 0 or 10.  Other abbreviations such as ‘U’, Θ, or ‘Ū’ are also open to misinterpretation. For this reason, it is recommended that the word ‘units’ is always used and is not abbreviated. Furthermore, the word should be clearly separated from the number, as for example ‘10Units’ can be misread as ‘100nits’ whereas ‘10 units’ is clearer. (NPSA RRR013  supporting information p3)

Use of ordinary syringes

‘Wrong dose’ errors can also occur when ordinary (non-insulin) syringes are used to administer insulin. Although, in theory, this is possible, in practice, mistakes are common because nurses do not always find it easy to convert a dose in units into a volume for administration. The insulin syringe is designed for insulin 100 units/ml and is marked in units whereas a standard 1ml syringe is marked in volumes. For example, in one case, 6 units of insulin was prescribed but the nurse administered  0.6 mls (60 units) of insulin using a non-insulin syringe. The nurse had mistakenly thought that 0.6ml contained 6 units of insulin. (Ref NPSA supporting info 2010 p5) Numerous reports of this type of error have been received.

A further type of ‘wrong dose’ error can occur when prescribers are unfamiliar with premixed (biphasic) insulin products.   Hypoglycaemic adverse events have been reported where patients have been administered high doses of pre-mixed insulins because the suffix of the brand name has been misinterpreted as the dose for administration. For example, ‘Novomix 30’ has been interpreted as a dose of 30 units, whereas, in fact, the ‘30’ indicates the proportion of rapid-acting insulin in the mixture. (Ref personal communication Gillian Cavell + KHP Sure-med Alert June 2014)

Omitted and delayed insulin resulted from:

• insulin not prescribed on hospital admission and transfer

• failure to prescribe or supply the correct insulin preparation, vial, cartridge or pen

• confusion over insulin dose administration when patients were ‘nil by mouth’

• insulin dose not administered at an appropriate time to the administration of food (including enteral feeding).

In the UK NPSA study, selection of the incorrect insulin product was described in 2,201 incidents (14% of the total). This was mainly due to similar looking or sounding names and lack of familiarity with insulin products. (Ref Cousins 2011 p29)

For example (in the UK):

Adherence to insulin therapy is generally poor (ref Davies 2013) and patient errors account for some of the reported adverse events associated with insulin treatment. Meal-planning misadventures and insulin product mix-ups appeared to be major contributory factors to emergency room visits in one large analysis. (Ref Geller 2014) An analysis of reports to a Drug and Poisons Information centre in Canada found that insulin dosing errors were more common in the evening and usually involved accidental administration of short-acting insulin. (Ref BC DPIC website 2013a) This could have been due to the fact that many patients were treated with so-called ‘basal-bolus’ regimens in which a long-acting insulin is given at night and boluses of short-acting insulin are administered before meals. Thus, the evening dose differs from the daytime doses. Other factors could be tiredness and visual problems. (Ref BC DPIC website 2013b)

Serious adverse events have also been reported with the use of insulin pumps. In 2012 a report from the US Food and Drug Administration concluded that the main contributory factors were patient errors and inadequate support from healthcare professionals. The report advised careful patient selection, education and ongoing support as key measures to reduce future errors. (Ref  FDA report 2012)

Recommendations for safe use of insulin have been published by a number of organisations including the National Patient Safety Agency in the UK. Key recommendations are shown in the box below

Recommendations for safer use of insulin

3.  All clinical areas have adequate and accessible supplies of insulin syringes and subcutaneous needles.

4.  An insulin syringe must always be used to measure and prepare insulin for an intravenous infusion. Insulin infusions are administered in 50ml intravenous syringes or larger infusion bags. The use of ready-to-administer infusion products e.g. prefilled syringes of fast acting insulin 50 units in 50ml sodium chloride 0.9% should be considered

5.  A training programme should be put in place for all healthcare staff (including medical staff) expected to prescribe, prepare and administer insulin.

The 25/50 rule was developed in Australian hospitals to avoid high-dose insulin errors. It has since been adopted by one London hospital. The scheme requires prescribers to validate (and record the validation) of high doses of insulin.  A high dose is defined as more than 25 units of a short-acting insulin or more than 50 units of a long-acting insulin. (Ref Dooley  p639a) The administration of high doses that are not validated and documented as such is temporarily delayed until validated by the prescriber. (Ref Dooley p639b) In Australia the implementation of  the scheme was found to reduce the potential for incorrect high-dose insulin prescribing and administration errors.  (Ref Dooley 2010 p643). At Kings College Hospital in London a similar scheme has been incorporated into the electronic prescribing system and a safety alert reminder was issued to remind prescribers which limit applies to which insulin products. (see box/panel  below)

A further safety measure was the withdrawal of 100-unit insulin syringes from clinical areas. Surveys had shown that insulin doses larger than 50 units are rarely required. (Ref Clark 2014 p41) 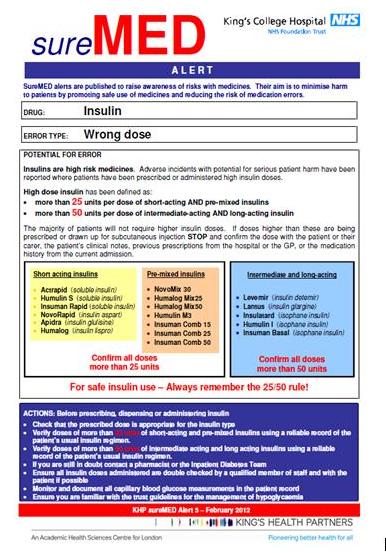 Errors with insulin dosing can cause serious harm or death. Understanding of the factors that contribute to adverse incidents and knowledge of effective measures to reduce risks are important for all healthcare practitioners and help to ensure that this valuable treatment modality is used effectively.

medicalupdateonline.com is brought to you by International Medical Information. For more details, visit http://www.medicalimi.com

Disclaimer: All information on this site has been collated by healthcare professionals from around the globe. Where every possible step has been taken to ensure its accuracy, MedicalUpdateOnline cannot accept responsibility for the authenticity of the content matter.

Copyright: The copyright of the material on this site rests with the author unless otherwise indicated. It is a breach of copyright to use any material from this site without prior written consent.